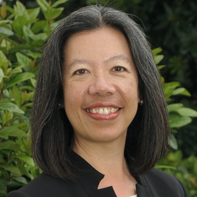 ​Angela Woo is Director of Instrumental Music and Chair of the Department of Visual and Performing Arts at John Adams Middle School in Santa Monica, California where nearly 350 students are enrolled in one of three concert bands or three string orchestras.  The John Adams ensembles have consistently earned the highest possible ratings at performance festivals, and in 2011, the John Adams Middle School Wind Ensemble was selected to perform at the California All-State Music Education Conference as the only middle school concert band in the state to be so honored.

An alumna of the University of California, Los Angeles, Ms. Woo holds the degrees Bachelor of Arts in Music Education and Piano Performance, the Master of Education, and the Master of Fine Arts in Conducting.  She also holds the Master of Arts in Educational Administration from California State University, Northridge.  Prior to her appointment to John Adams in 1995, Ms. Woo was Director of Music at Corona del Mar High School where she led the band, orchestra, choral and jazz ensembles.  She was also conductor of the Santa Monica College Wind Ensemble.

Ms. Woo enjoys an active schedule as a guest conductor, clinician, and adjudicator with numerous honor groups, conducting symposia, and music festivals throughout the country and internationally.  She has been invited to lead professional development workshops for music educators at both the middle school and high school levels.  In addition to her work in Wisconsin, Georgia, Florida, Nevada, Indiana, Colorado, Utah, Tennessee, Louisiana, and New York, she has conducted the 2004 Kentucky All-State High School Concert Band, the 2007 Oregon All-State Middle School Band, the 2014 California All-State Jr. High Concert Band, and the 2016 Michigan All-State Middle School Band.  Ms. Woo appeared as a guest conductor with the 2018 State Honours Ensemble Program at the Queensland Conservatorium (Griffith University) in Brisbane, Australia.  Most recently, Ms. Woo conducted the Honors Performance Series 2019 Middle School Orchestra and the 2020 High School Symphony Orchestra, both in Carnegie Hall (New York).

Ms. Woo has been recognized by local and national organizations for her contributions and service to music education.  Her honors include the 2005 Santa Monica-Malibu District Teacher of the Year from the Santa Monica Rotary Club, the 2019 Shining Star Award from Education Through Music - Los Angeles, and the 2020 Gold Award by the Southern California School Band and Orchestra Association.  She was honored at the Midwest International Band and Orchestra Clinic as a 2012 Legion of Honor Laureate by the John Philip Sousa National Foundation.

​​Sean Garnreiter is Assistant Director of Instrumental Music at John Adams Middle School where he has been on staff since 2011. He is also Director of the JAMS Jazz Band.  Mr. Garnreiter earned his Bachelor of Arts in Music Education from UCLA where he was Drum Major of the UCLA Bruin Marching Band.  He recently earned his Masters in Music Education from Central Washington University.  He is a former member of the Pacific Crest and Santa Clara Vanguard Drum and Bugle Corps, and has been a staff member with the UCLA Bruin Marching Band as a brass, woodwind, and marching clinician.

After student teaching at JAMS in 2008, Mr. Garnreiter served as an music teacher at four different elementary schools with the Los Angeles Unified School District.  He also founded an instrumental music program at a middle school in South Central Los Angeles.  After teaching in the LAUSD for three years, Mr. Garnreiter returned to JAMS as an Instructional Assistant and faculty member with the instrumental music program.

Mr. Garnreiter is recognized by the Santa Monica Junior Chamber of Commerce as 2017 Outstanding Young Teacher of the Year.  This annual award is presented by the Santa Monica Jaycees to acknowledge the work of young professionals who are dedicated to leadership and development, and create positive change in our community.